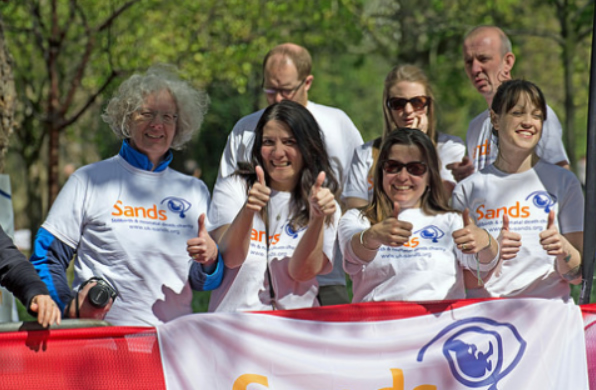 Having worked in the sector now for over 8 years and first starting off in online fundraising I thought it was about time for me to do my bit and join a cheering squad, no I’m definitely not a runner, despite my personal trainer’s best efforts.

Back in October 2013 I was asked by one of my clients, Sands, if I would go down to the marathon to take some pictures of their runners that they could use on social media and marketing materials. Having an interest in photography and having never been to the marathon I accepted the challenge of trying to capture these amazing athletes at their final stage in a journey.

I turned up around 9 with chair and packed lunch in hand and headed to meet the team on Birdcage Walk. We were about 800 metres from the end. It was a great day for being a spectator, London in the sunshine is a truly magnificent city.

First off were children, I managed to test the settings and get in some training for what the day was going to hold and then I saw the first casualty, a child collapsed by the side of the road and police and medics turned up fairly swiftly and got him back up on his feet and with the roar of the crowd he continued on his merry way and this is what I have found so heartwarming. I work in the sector so I see all the great causes that people raise money for and admire some of them in the way that they support their fundraisers but being part of the cheer squad was a humbling and uplifting part of the day.

These runners who had been in training during the monsoon winter weather in the UK were doing their bit with their motivation keeping them moving forward.

I realised that the crowds along this part were helping motivate the people who really thought that they had had enough. I remember a guy sitting on the side of the pavement in front of where I was cheering and at least four runners stopped to try and get the guy moving, he took his breath and with an eruption from the crowd he continued on his way. I also remember someone else on the other side of the street getting a fireman’s lift for the last part of this gruelling 26.2miles and that is what it was about helping each other achieve something truly amazing.

The amazing costumes and the grimacing on the runners faces as they completed the challenge running in the heat and the euphoria of the crowd. I bow to each and everyone of them and say well done and thank you – you made it an amazing day for us the “not so fit” marathon supporters.

Here’s a selection of the pics I took, if anyone would like original copies, please get in touch and I’ll email them across to you.